We finally got some snow - and actually enough worth talking about!  It would have been better had it started Sunday night (to get us out of work), but it was pretty to see everything turn white :)  Daniel and I were stuck in the house all weekend, so by Sunday we were ready to get out and run some errands.  Being stuck in the house isn't bad when it's your choice!  I took some pictures of the house in the pretty snow...
Front 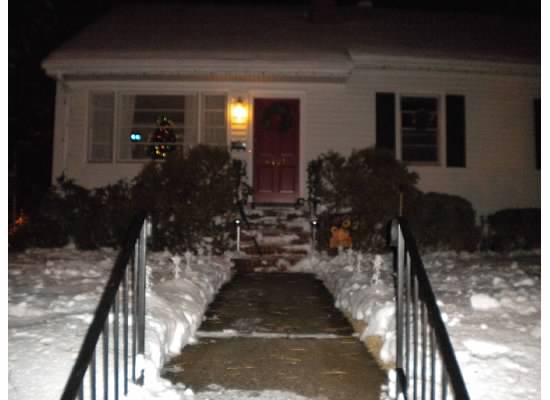 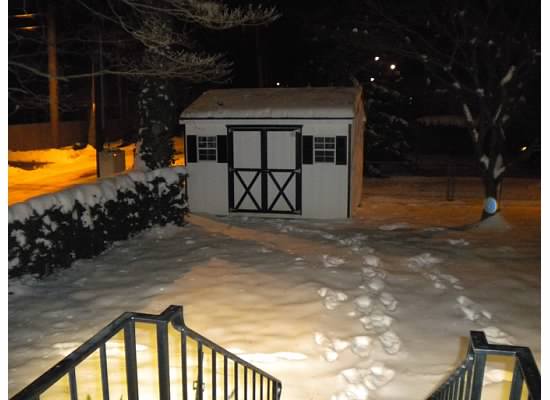 Santa got snowed in! 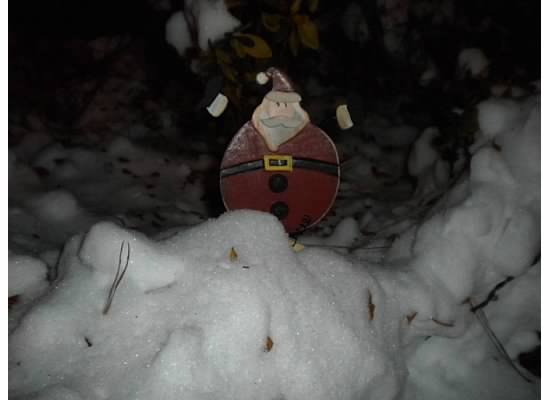 Just a picture I thought was neat... 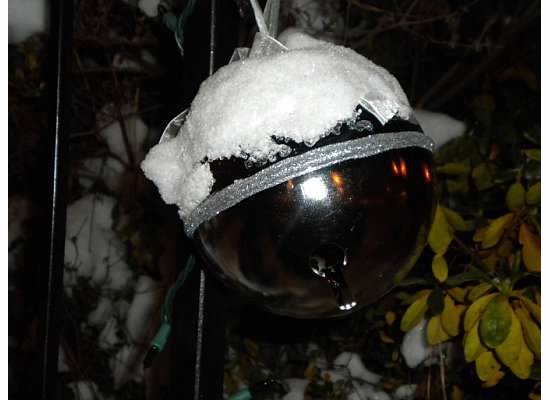 I also took a picture of the wreath my saleswoman at work sent us - which smells absolutely wonderful! (The picture looks a little weird because of the camera flash) 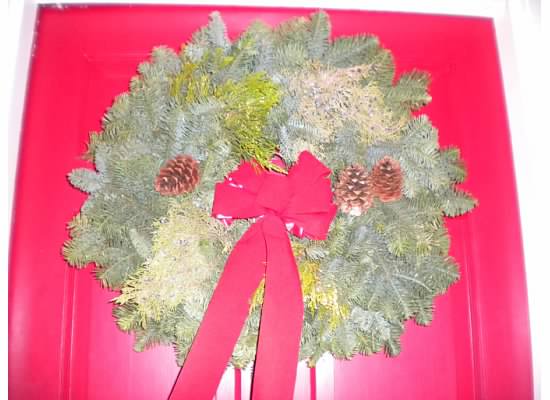 The snow was pretty and fun for a day or two, but now it's just slushy and gross!
Posted by Anonymous at 12:49 PM No comments:

Email ThisBlogThis!Share to TwitterShare to FacebookShare to Pinterest
Labels: Erin

Chey & Kelli had Tyler last weekend, so Santa showed up early because he knew he wouldn't be able to get to the house on Christmas Eve :)  The boys made out good this year! 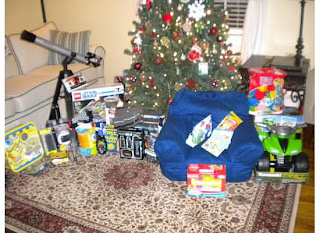 Everything before the living room was a disaster! 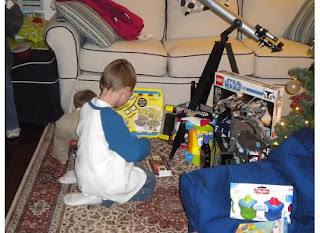 Both boys looking through their gifts! 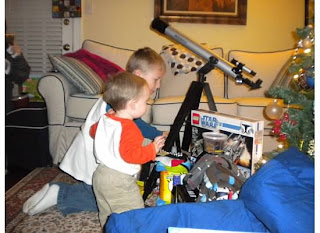 And of course Erik loved his little 4 wheeler! 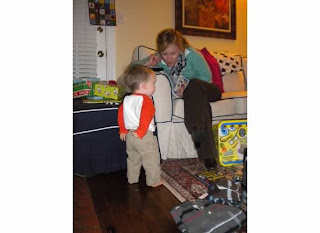 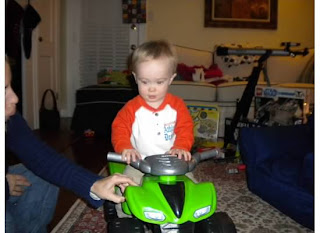 Can't wait until Christmas Day to see Erik get into even more!

Posted by Anonymous at 12:38 PM No comments:

Email ThisBlogThis!Share to TwitterShare to FacebookShare to Pinterest
Labels: Family

While we were all in Ashland for Erik's birthday party, mom wanted to take Christmas pictures...so we did!  Here's a little preview :-) 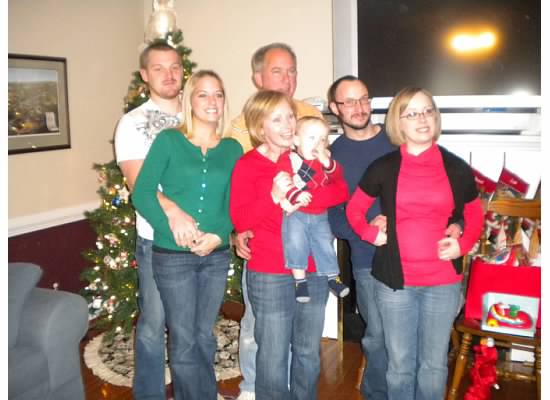 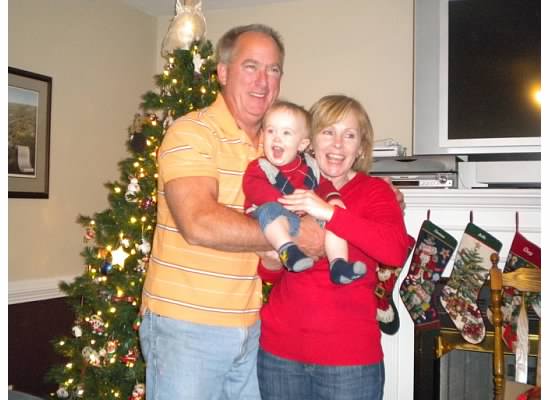 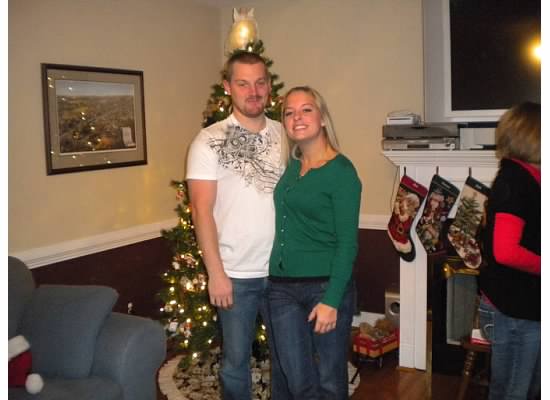 Merry Christmas xoxo
Posted by Anonymous at 9:46 AM No comments:

I cannot believe my nephew is ONE! Time flies! I already know he is going to be the one to make me feel old - I already am saying "I remember when we were sitting in the waiting room awaiting your arrival!" This past year has been so fun and now with him walking all over the place - even better! Hes the cutest! 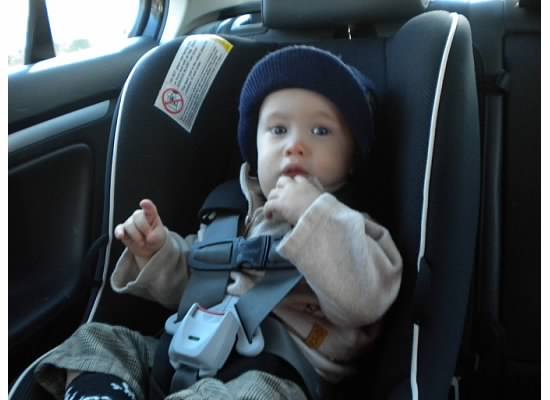 Erik playing with all of Gran & Gramps musical stuffed animals! 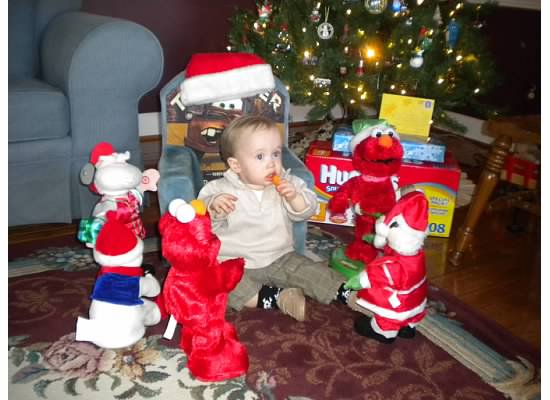 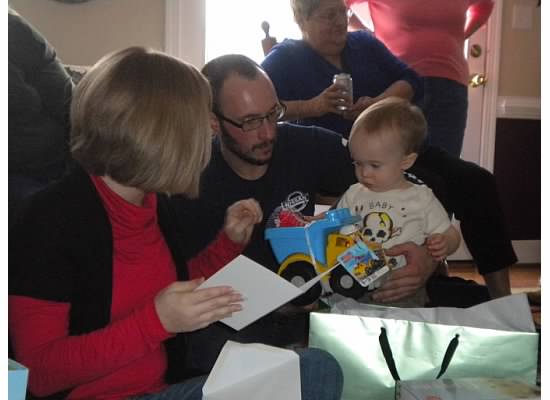 Happy Birthday to you! 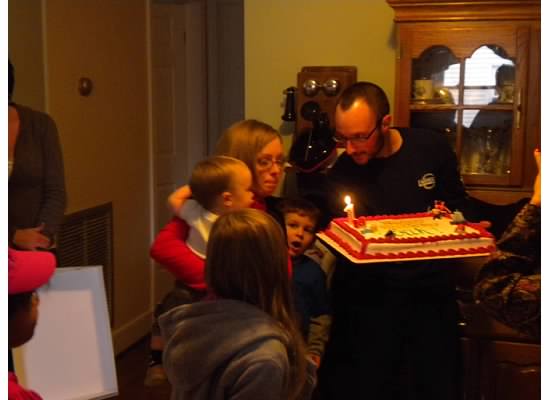 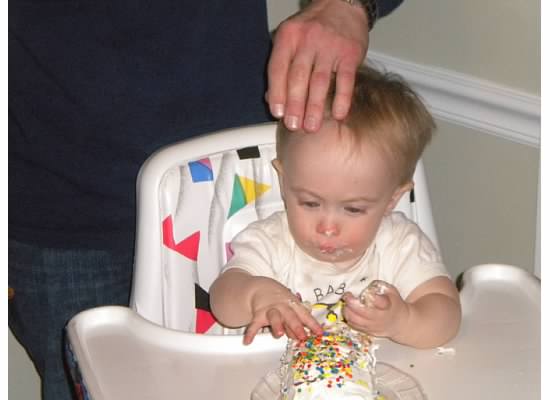 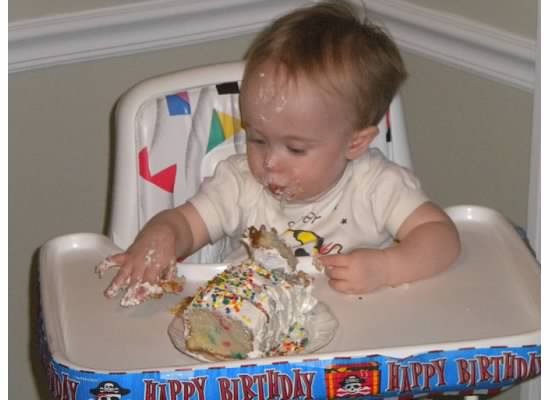 Happy Birthday little man - Uncle Daniel and Auntie love you! xoxo
Posted by Anonymous at 9:38 AM No comments:

Email ThisBlogThis!Share to TwitterShare to FacebookShare to Pinterest
Labels: Family

Friday December 4th was MWV's Christmas party which was held at our new building downtown.  This was everyone's first time seeing the building that we're going to be working in.  It's super nice and big!  I might get lost for the first week or two - no lie!
They gathered everyone outside for the illumination - I actually thought they would have some Christmas lights on the building, but they just lit each floor up for everyone.

I didn't take any pictures inside, but we now have a nice cafeteria and a coffee shop (ah!).
The girls from work and our boys all went to Blackfinn afterwards.  It was a good time - I love the girls I work with! Here's some pictures of course :-)
Linda, Kriston, and Holly

Posted by Anonymous at 8:19 AM No comments:

It's December! I can't believe it - this year has gone by way too fast!

Right after Thanksgiving, I decorated for Christmas, which I was really excited about.  I still want to run out and get a few more decorations.  Our den is a little bare on the decorations, and I want to get some lights for the outside of the house.
What's a post without pictures?!

This picture is of the little tree that people can see from the outside :)

And our Christmas Tree (it actually looks really small in the picture) and no I haven't started my Christmas shopping, so the bottom of the tree is BARE! 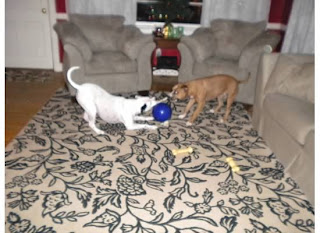 Posted by Anonymous at 10:31 AM No comments:

So another Thanksgiving has gone by....way too fast!  We had a total of 3 Thanksgiving dinners (this might explain the 5 pounds I've gained...ugh!)

First stop was Daniel's grandparents house - great food and family time.  The only picture I got was of Daniel trying on his gradma's glasses....hilarious!

We ended the day at my uncle's girlfriend's house.  We were pretty stuffed from the lunch, but we both squeezed in some sweet potato casserole - which is my favorite dish on Thanksgiving!  I was excited to get there and play with Erik! Here's a few pictures of our cutie of a nephew :) Love him!

Friday night we went to Carter & Ashley's house for another Thanksgiving dinner - this time with friends.  It was delicious! A lot of things we didn't have to eat the night before we got to eat there.  I took pictures but somehow my card was popped out of place, and the pictures got saved directly onto my camera.  As soon as I figure out how to get those off, I'll post to this.  For now, I only have one picture from that night and it's pretty bad quality....
Ashley and I hanging out on the stairs!

Daniel and I are thankful for so much this year! <3
Posted by Anonymous at 6:29 PM No comments:

So this past weekend I headed out to Blacksburg for girls weekend and to see a Tech game.  Ragan's been alone the past few months since Dustin's been in rotations for medical school, so we wanted to get up there to keep her company.  Dustin surprised her on Thursday night by coming home - but the girls still made the trip out there and we had so much fun!

Sarah & Chelsea drove from Northern VA out there Friday night.  I rode out there with Michelle, her brother, sister-in-law, and another friend.  We decided to spice up the long drive out there and drink....the car ride was super loud but tons of fun.

Once we got to Blacksburg Ragan, Chelsea, and Sarah picked me up and took me to their Townhouse.  Ragan and Dustin are always greats hosts

Saturday morning we woke up and started immediately getting ready for the game.  The girls all started talking about how I am a blogger now, yet none of them actually read this.  So the joke of the weekend was to get as many pictures for my blog as possible - "BLOG IT!".  This might be a long post....
We started out by stopping of at Kroger to get some beer and a few tailgate goodies.  Chelsea is a vegetarian, so we had to take the opportunity to picture her choice of tailgate food:
1.  Whole french bread baggette - Check!
2.  Whole Avacado - Check!
3.  Wedge of Blue Cheese - Check!

Then we were off to tailgate! So much fun! We actually decided to stay out and tailgate the entire time instead of going into the actual game. Everytime we heard the crowd cheer we knew Tech scored.  Here's many pictures from our tailgate experience.
Love us!

Below is where I had to give Pat (Dustin and Ragan's uncle) a pep talk.  We were playing flip cup and he wouldn't set down his cigar....it was messing with his game.
VERY Serious....

Then we decide to take some jumping action pictures - best idea of the day I think....
Get Ready to Jump!

Then it was the boys time....minus Pat

Ragan had some tissue issues the entire day....that and Four Loko - bad mix!

Having so much tissue problems that she resorted to using the french bread baggette wrapping....yes that is what I said....
Chelsea in the background is hilarious though - eating her tailgate food and looking a little scared.

After tailgating we went out to a bar - we had so much fun dancing around!

I will end with this picture....

Girls weekend is always a good time! Can't wait until the next one! <3
Posted by Anonymous at 10:57 AM No comments: