Hadleigh is almost 4 years old – she’s a little girl. No longer a baby, but of course will always be my baby. It’s sad she can’t stay the small innocent girl who thinks her mama and daddy are great all the time. On the other hand, it’s so exciting seeing her grow into a little girl and learning new things every day. 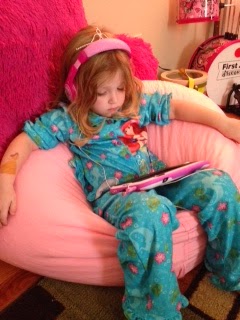 Hadleigh is still going to school 3 full days a week.  She does a lot better now, in that she doesn't cry most mornings. We still have bad mornings, but it’s so much better than it used to be.  Hadleigh isn't a morning person in general. J She does well at school and participates for the most part.  Her teachers do tell me some days she chooses not to participate in certain things.  Usually it is art/craft time when it’s something she views as “messy” or sometimes even during snack time when they’re offering something she doesn't like. She’s not disruptive (thankfully), she just sits off to the side quietly.  She will also run to the bathroom frequently during the day for her teachers.  They even asked me if she had troubles going to the bathroom – boy she has them fooled.  I cleared that up in saying she’s running to the bathroom to get up from (or out of) whatever they are doing at the moment.  Usually nap time is the culprit. Surprise! She’s so smart and has her mind set on things, that’s for sure. 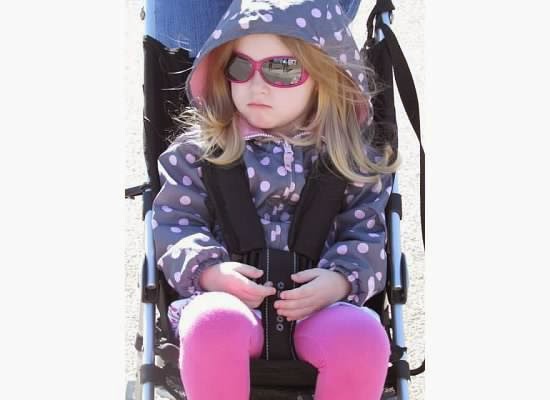 In regards to learning, here’s a list of things I can come up with off the top of my head.
Counts to 30
Counts to 10 or 20 in Spanish
Knows some of her colors in Spanish
Knows how to verbally spell her name
Can write “H”’s anytime, but is so stubborn to write any other letters (even though we know she can!)
Knows all the months of the year & the year we are in 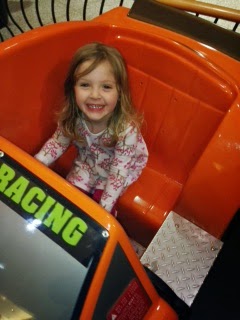 Hadleigh is still pretty picky when it comes to eating.  Anything that “looks” funny to her is immediately banished from her plate.  We can get her to eat pineapples, apples, bananas, and watermelon with no problem so those are our go-to’s.  She’s not huge on vegetables, but will eat corn, lettuce, and lima beans. She loves snack foods and has mastered chewing gum! 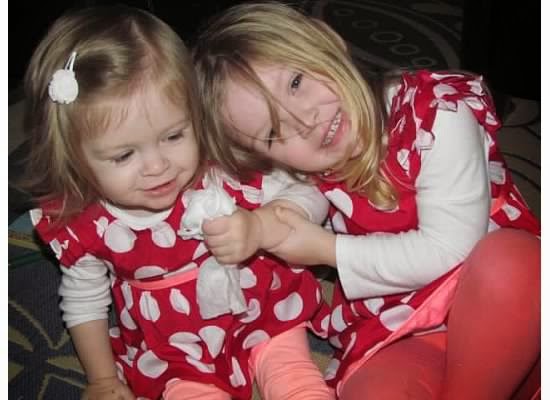 She is definitely a girly-girl! Loves to dress-up and play princesses, but then also LOVES books, playing school, and playing doctor.  Playing school / reading books probably tops her list.  It’s so cute to see her “read” the books to us, and then turn the book around to show us the pictures. J  We signed Hadleigh up for gymnastics about a month and a half ago.  After the ballet experience we weren't sure about it, but it has been great! No crying and she is participating! She has a leotard that has pink in it, of course. 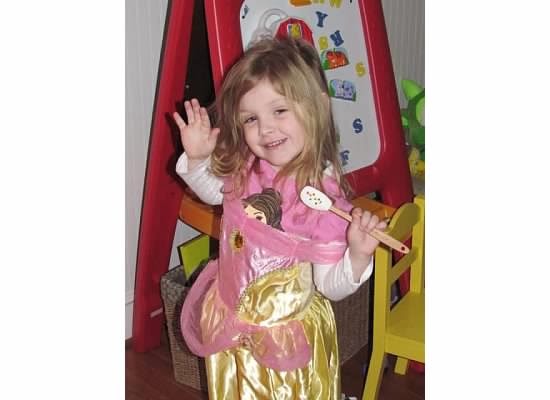 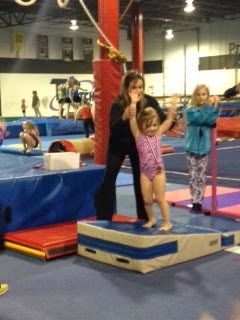 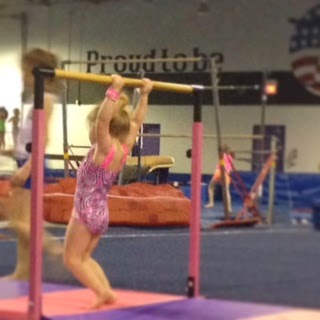 Funny Things She has Said:
This one was back in September, but I haven't had an update on her since she's said this...
Hadleigh hadn't been listening and I told her not to try and move the chair, but she moved the chair anyway.
Me: "Hadleigh, what part of 'don't move the chair' did you not understand"
Hadleigh: "mama, we understand. We just don't listen."

We were in a rush one day and we all needed showers & baths.  So, we decided to double up to make things go faster. Hadleigh would shower with Daniel and Hayden with me. No big deal. While Hadleigh is in there with Daniel, she asks, "How long you had that??"
Daniel, a little shocked, responds with, "Had what? My wiener?"
Hadleigh - "Yeah, how long you had that?"
Daniel - "Well...since I was born"

Email ThisBlogThis!Share to TwitterShare to FacebookShare to Pinterest
Labels: Hadleigh 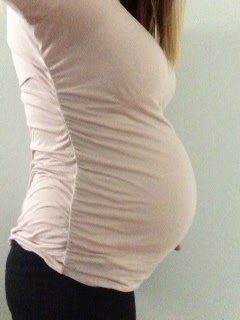 How Far Along: 29.5 weeks
Due Date: 6.3.14 but still measuring a week ahead (or more)
Gender: GIRL - three beautiful little girls!
Movement: yes! She moves a lot now and I’m far enough along to where I can prompt her to move sometimes.  She’s been head down since 20 weeks, so it must be a comfy position for her.   It’s funny on days she has hiccups – I feel the hiccups the most down in my crotch J Weird.
Weight Gain: Ugh, so much for staying consistently great on weight gain! I just went to the doctor yesterday and gained an additional 12 pounds in the 9 weeks since I’ve posted an update. Whew! Overall weight gain is fine, but it’s definitely still a bit of a shock.
Symptoms: I’m not having too many normal pregnancy symptoms.  Feeling big and just started getting uncomfortable last week.  Restless legs are still acting up at night and my energy level is starting to drop again.
Cravings:  The craving for sweets definitely picked up after 20 weeks, but I haven’t really splurged myself too much.  The biggest craving for me has been ICE! I fill my glass with crushed ice and then top it off with a bit of drink.  Brussel Sprouts have been another thing I’ve craved.  I never liked them before this pregnancy, but I cannot get enough of them roasted in the oven.
Sleep:  It happens.  With recent issues (see below) there hasn't been much.  But other than that, sleep is not peaceful.  I wake up to move, wake up to pee, wake up just to wake up…just getting me ready for a hungry newborn!
Stretch Marks: ha! Yes, but from Hadleigh & Hayden. I haven’t noticed any additional marks, but who knows.  I’m one to get the stretch marks in the last 2 weeks of my pregnancy, so I still have some time.
My Overall Health: Can we add an additional health issue to my pregnancy list? Sure? OK.  So let’s start at the beginning.  Saturday the 15th, I started having pain on my back left side. No big deal.  I went on about my business, but by early evening it was bad enough to have me in tears.  So I called my OB, and they told Labor & Delivery I was coming in.  I was pretty sure what I was experiencing was kidney stones, but if you’re over 20 weeks along – any pain associated in the abdominal area – you get sent to labor & delivery instead of the ER.  No big deal. I got there; they took a urine sample, and got me hooked up to an IV.  I received fluids, pain medication, and nausea medication.  They also put baby girl on monitors to make sure she was OK through all of this.  She was perfect, and I was so much better now that the pain was being managed.  The doctor on call ended up admitting me for the night – it was the only way they would make sure my pain was managed and left on an IV.  Blood work and urine pointed to kidney stones. I knew it.  Since they were really just keeping me to pump me with fluids and meds, I talked them into discharging me on Sunday evening.  I left the hospital with oral pain meds to manage the pain at home. I got home and things weren't as simple.  The pain medication wasn't lasting me as long as it should have been – and then I started itching at night uncontrollably.  On top of that, I wasn't sleeping. Fun stuff. I took some Benadryl to take the edge off of the itching, which it did, but I was still itching like crazy.  Finally got an appointment with the urologist who gave me an ultrasound and confirmed for sure that I had kidney stones – on both sides.  The one causing me pain was about 10mm and I was told I definitely wouldn’t pass it on my own. Sweet. I’m not sure of the path forward just yet, but my OB suggested yesterday that I have 2 steroid shots early next week and then have the surgery to remove the big kidney stone.  We shall see.  As of right now, I’m still in pain, taking pain medication, and still itching. So, that’s been my week!
Maternity Clothes: Oh yeah.  Although I still force my butt into some pre-pregnancy jeans with the bella band.  I might not feel awesome a couple hours after wearing them, but damn I feel good when I think to myself, “I’m in my pre-pregnancy jeans!” ha. Convoluted logic, I know.
Names:  Still no name!  The names get harder and harder with each child!  Contenders are Harper, Hollyn, and Hunter. We haven’t been leaning towards one more than the other and we have NO clue what her middle name would be either.
Hadleigh is: Three and a half! Ha. Her moods change frequently, but I really think she is going to be such a great big sister x2.  This morning her and Hayden were hugging, kissing, and laughing in bed.  Daniel asked, “Are you going to love the baby in mommy’s belly just as much as you do Hayden?” and she replied so sweetly “yes”. I know all of that will change as soon as the new baby starts walking and finding her own personality J
Hayden is: going to be obsessed with her baby sister.  She loves her babies and she loves to nurture.  It’s so funny how young some of the traits start.  I can see both girls being great mothers, but for Hayden it comes a lot more naturally already at 20 months.  It will be very sweet to see her interact with the new baby, but at the same time it makes me a bit nervous because she is so lovey on babies.