So as of today I'm 18 weeks pregnant! 2 more weeks until we find out if this baby is a boy or girl :)
I started to feel much better around week 14.  I get the occasional nauseousness or headache, but it's few and far between.  I have some more energy, but by the end of the day I'm super exhausted. At my 16 week check-up last week I had only gained 4 pounds - woohoo!!  I hope this weight gain continues at this rate.  I atleast want to gain lower than what I did with Hadleigh - so I can't go over 40lbs.  I'm not sure if I've felt this baby move or not.  Sometimes I think I do, but it's so vague that I'm not too sure.  People say you're supposed to feel them alot sooner with your second cause you know what it feels like...ugh.  So of course, this makes me worry a bit.  I'm worrying so much more throughout this pregnancy!!
My blood pressure has been perfect.  I believe last week it was 118/68?  (I could be fibbing here, but I think that's what I remember hearing).  Also at the 16 week appointment - heart rate of the baby was 151bpm.  I still have no clue if I feel boy or girl...I go back and forth.  Daniel and I really don't care as long as he/she is healthy.
Another baby update will come in 2 weeks!!
Posted by Anonymous at 2:38 PM No comments:

Hadleigh has been busy as ever!  Her personality has really come out even more and she's so funny to be around.  She loves playing outside and she loves watching some TV shows.  Her normal shows are Sesame Street and then recently she enjoys the Sprout Goodnight Show - especially when they do today's birthdays with Chica!  She likes The Fresh Beat Band which is funny, cause it's geared for older children - but the girl loves singing and dancing regardless of what show.
She's "talking" a lot more - not really saying much that's clear to us, but she speaks jibberish all the time.  She will look at you like you should know what she's saying too.  The words we can understand pretty clear are mama, dada, isis, this, wow, me, roll, ball, du (for duke).  Her new things are "roll it up"  and she rolls her arms - she really only says roll, but she gets it from us telling her "roll it up, roll it up, put it in the pan!"  We tickle her afterwards, so when she wants to play the game, she starts rolling it up :)  She also will "shhhh" and put her finger over her mouth.  It's so freaking cute!
We've been in the process of moving into a new house, so she doesn't go to daycare anymore.  Really sad cause she loved it, but it's not convenient at all.  It would be fine if it started at 8am (I could drop her off before work), but they don't open until 9am which makes it hard.  I'm now working from home once a week, so I might take her on those days - haven't fully decided. 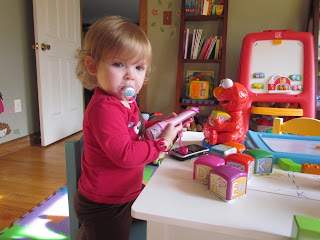 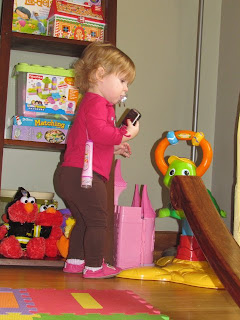 Posted by Anonymous at 12:20 PM No comments:

(This has been sitting in draft status for a long time, and I just forgot to hit publish...oops!)

We had a great Christmas! We all got spoiled and had a lot of fun with both of our families. Since I was taking pictures most of the time, Dada helped Hadleigh open up her gifts.  She loved ripping the paper :) 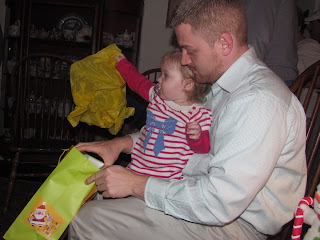 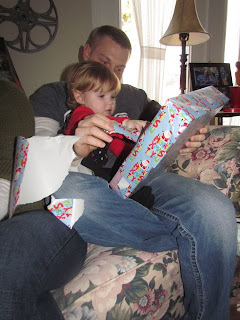 We celebrate with Daniel's parents and brother on Christmas Eve, so Hadleigh had a few more gifts to open before Santa's big arrival!  She loves loves loves her new pink bug <3 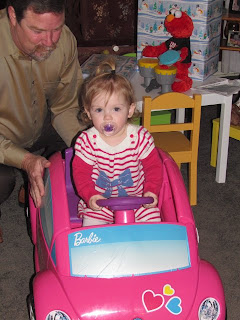 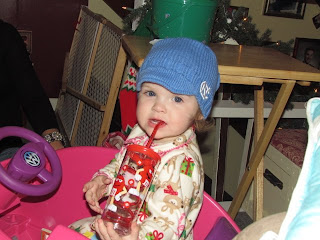 Christmas morning we woke up and saw what santa had brought Hadleigh.  Video of Christmas morning has already been uploaded to Youtube if you want to see how she reacted.  She especially loved the kitchen. 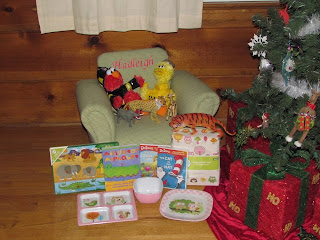 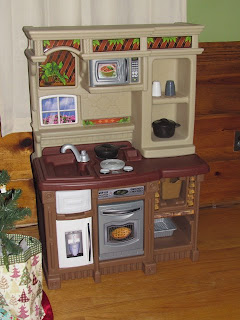 We had a busy day ahead of us, so we left home and went to my parents for breakfast and more present opening.  This was probably the last year we will do this since our kids will be getting older - mom and dad will have to travel to us starting next year.  Hadleigh had lots of fun with her toys and playing with Erik and Jaxson. 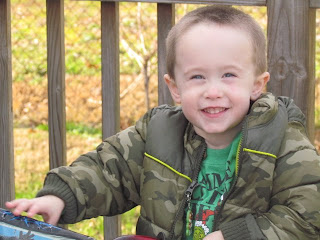 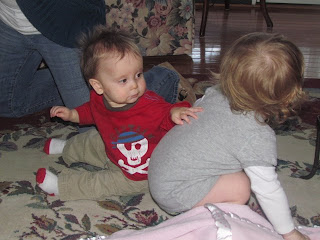 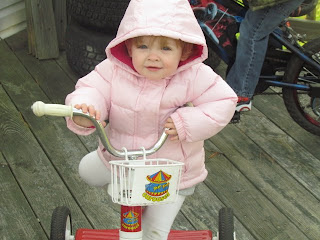 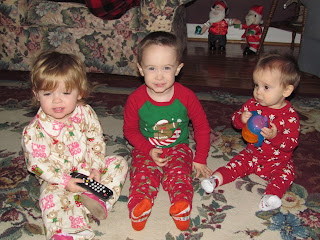 ﻿﻿
We finished the day at Daniel's parents where his entire extended family gets together.  It was a good time, although I wasn't feeling the best.  We did manage to get a Harris family picture. 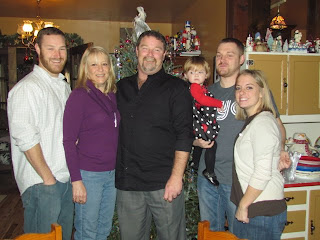