Happy Thanksgiving ya’ll!  I hope everyone is eating lots and spending time with their families!

Just some things I’m thankful for this year:
Daniel – My rock. Without him life would be no fun.  We’ve been together for almost 12 years and I love him more now than ever. He’s the best daddy and husband us girls could ask for.
My girls – They’ve blessed me to be called “mama” and that is amazing! They keep me on my toes and give me so much laughter and love.
Family – Our families are great – they are supportive, loving, and great examples of what love and family should be.
Jobs – Thankful for steady incomes to be coming in. It lets us provide for our families necessities and even some extras.
Health – So happy for the blessings of health all around us.
Friends – Even if we don’t see each other or talk to each other as much as we used to.  I’m thankful for when we do; we pick up right where we left off.
Blog World  - I've met so many wonderful ladies through this blog and I wouldn't trade it -  you all have been helpful in so many ways.
Isis & Duke – They are both our first babies and a huge part of the family.  I don’t show them enough now that we have kids, but they are loved tremendously.

I am thankful for so many more things.  I could go on and on…

A few days before Halloween, we decided to let the girls paint their own pumpkins.  I thought carving was too much for them.  Daniel and I would end up carving and they wouldn’t be as involved as they would want to be. So Paint it was!  Last year, I let Hadleigh put stickers all over her pumpkin so I wanted to do something a little bit different.
Hadleigh really enjoyed it.  Every time the paint would get “low”, she had to get more.  Hayden was interested for a few minutes, but then lost interest.  She was more interested in walking around and playing with the push car, so Daniel ended up finishing hers up.  Next year Hayden will have a lot more fun for sure. 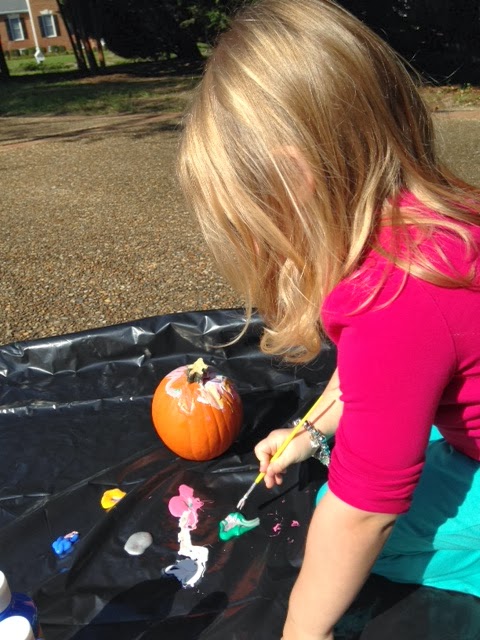 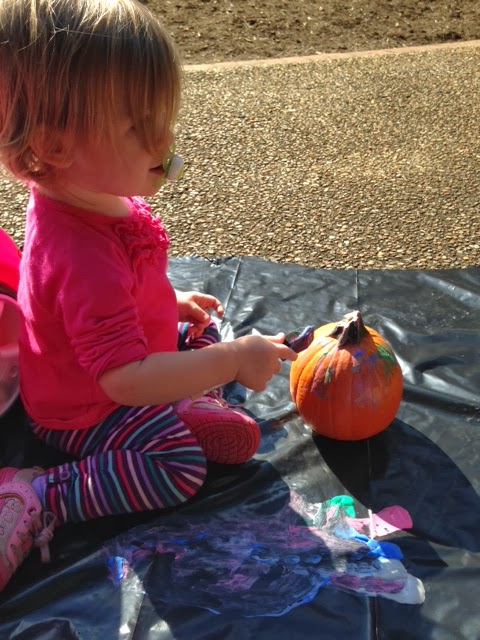 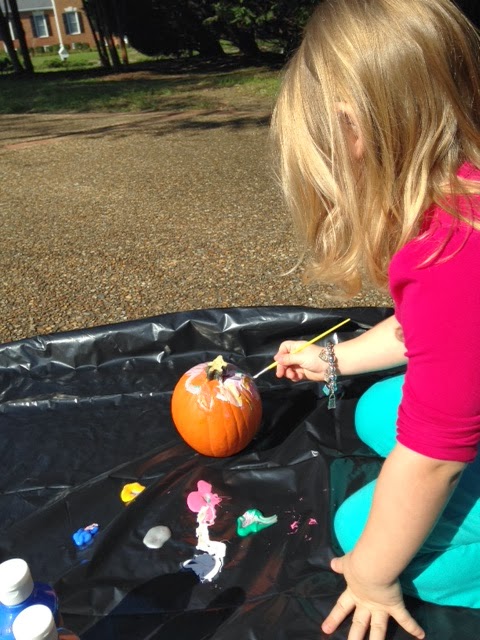 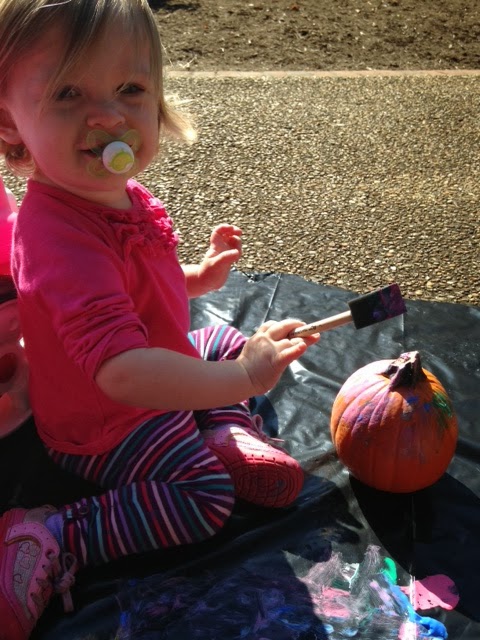 Can you tell what Hadleigh's favorite color is?? 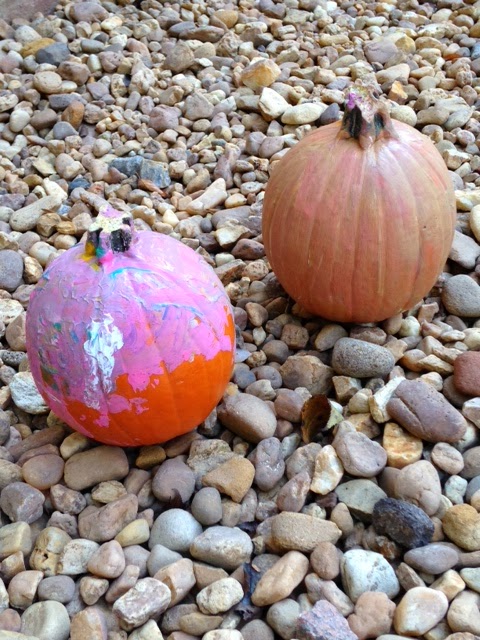 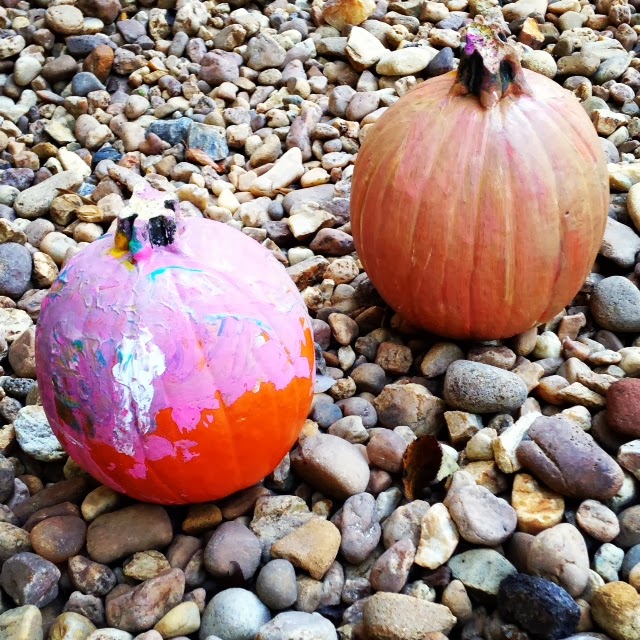 After we finished painting, we went inside for a lunch picnic.  While the girls ate, we watched Cinderella.  I love having picnics on our living room floor J 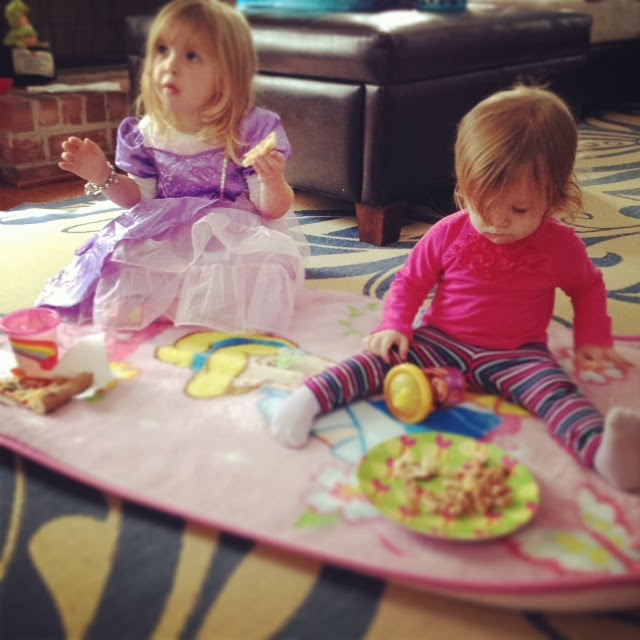 Halloween! The girls had a BLAST this year with Halloween.  Last year Hadleigh was super shy and didn't really like going to people’s houses saying “trick-or-treat”.  Well, now that I wrote that (and read it out loud), things weren't super different this year. Ha!  Hadleigh did great going up to our neighbors’ doors, but fell silent as soon as the door opened.  Maybe next year she will actually say “trick-or-treat”.  Hayden was all over it.  The people didn't faze her one bit, and she loved carrying around her pumpkin full of candy {even if she was dragging it by the end because it was so heavy}. 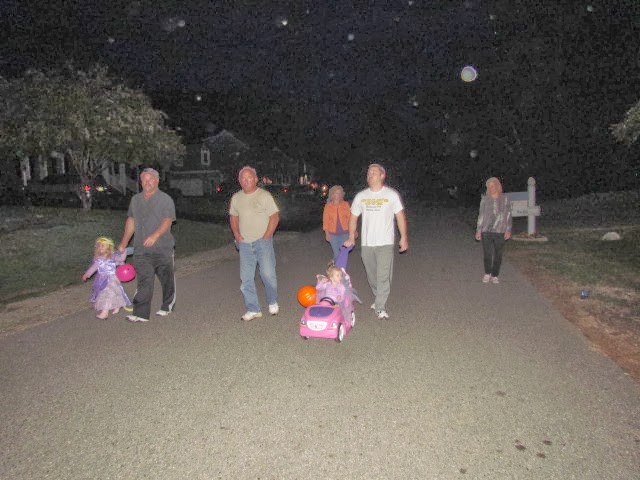 Our group for Trick-or-Treating! 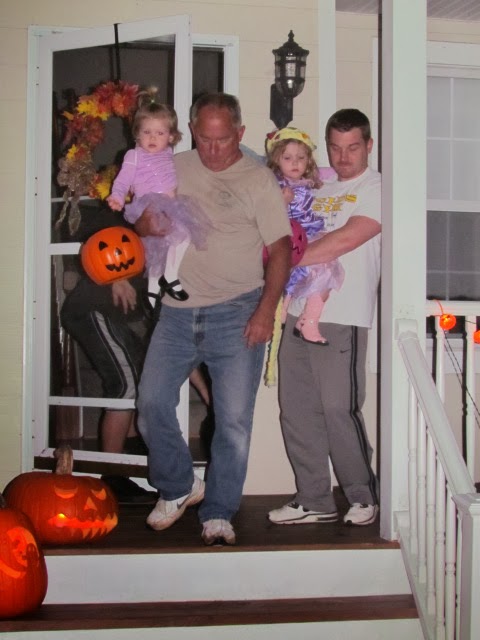 Hadleigh wanted to be Rapunzel, and she wanted Hayden to be Rapunzel as well.  I started down the path of making both girls tutus to wear.  It’s super easy to make, and actually turned out really cute!  My mom ended up having a purple dress she bought last year on sale, so we showed it to Hadleigh and she immediately said it was her Rapunzel dress.  So, that meant I only had one tutu to make for Hayden.  At the last minute, I decided to also make Rapunzel hair for Hadleigh.  Otherwise, she just would have looked like a little girl in a pretty purple dress.  I scratched the idea of even having Hayden as Rapunzel and we went with a fairy.  Both were happy with their outfits – Hadleigh loved her hair and Hayden loved her wings.  Hadleigh actually had to wear wings as well once she saw Hayden had some.  She also had to wear her pink cowboy boots, so she was definitely a unique Rapunzel ;) 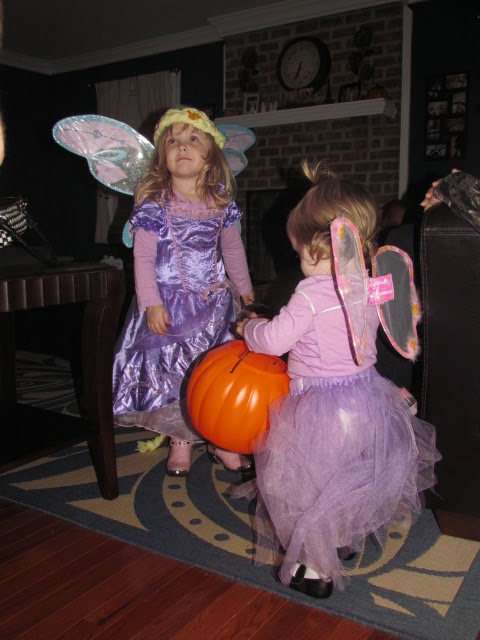 Neither would sit for a picture 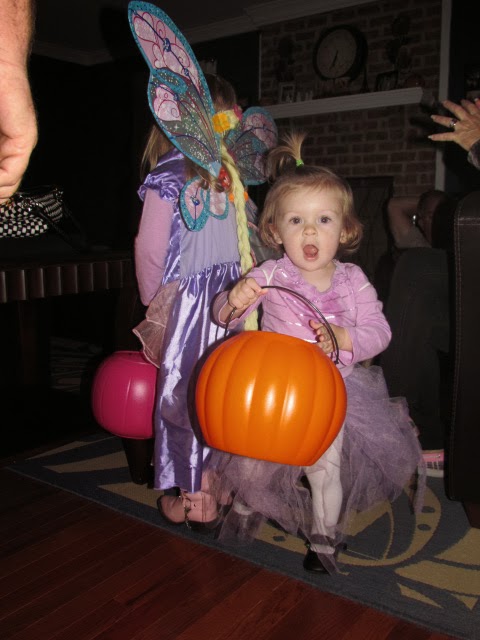 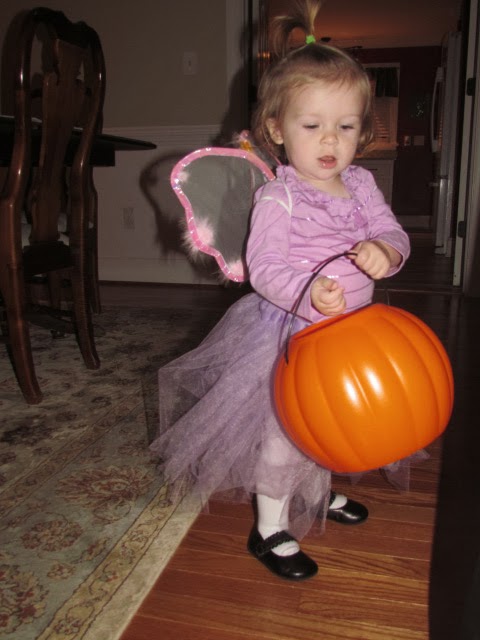 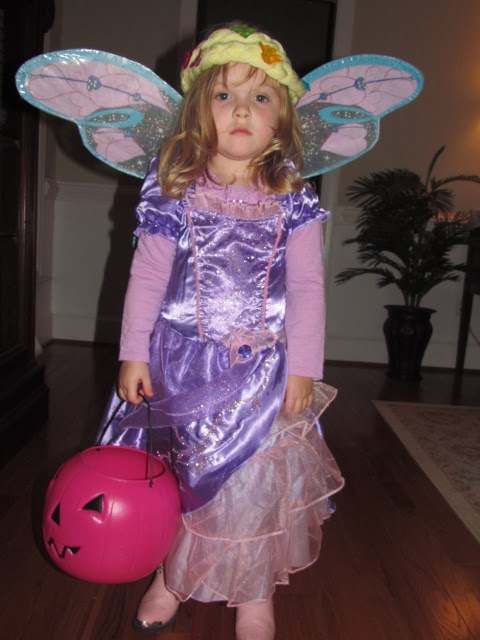 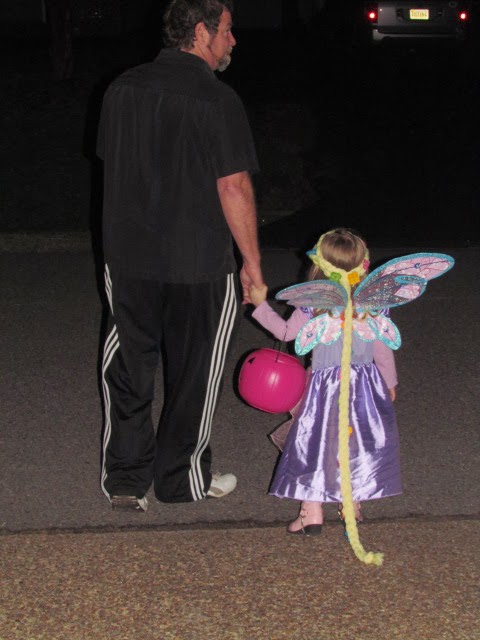 Better picture of her Rapunzel hair :)


I, of course, didn't take any progress pictures of the tutu or Rapunzel hair.  For the tutu, I googled how to make it.  Once I had the elastic cut to size, I just started knotting the tulle around it.  It was a little tedious, but really easy.  As for the Rapunzel hair, I cut a bunch of long strands of yellow yarn.  I then gathered them into 3 separate groups (this made it easier for me to braid).  I knotted the 3 groups of yarn together, started braiding it, and then tied it all in a knot again at the bottom.  I then wrapped it around Hadleigh’s head to get a measurement.  I made it too long, so I wrapped it twice and hot glued it so the head piece would stay intact.  To spruce it up a bit, I hot glued different colored flowers all over.  I was really impressed with my crafting skills!

Holy crap! I blogged! That’s right ya’ll – I’m back on the train after falling off for most of this month.  I promise, it’s for good reasons! Stay tuned J

Back in October, we took the girls apple picking.  We started the “tradition” last year by going to Graves Mountain.  We really enjoyed it, so we wanted to make sure we went again this year.  In Virginia, you either go to Graves Mountain or Carter Mountain to do your apple picking.  Since we experienced Graves last year, and Carter Mountain is a bit closer, we decided on Carter Mountain.  My friend Jen and her family joined us, as well as my parents.  Our day was great – the kids had fun picking apples and afterwards, we went into downtown Charlottesville to have some lunch. 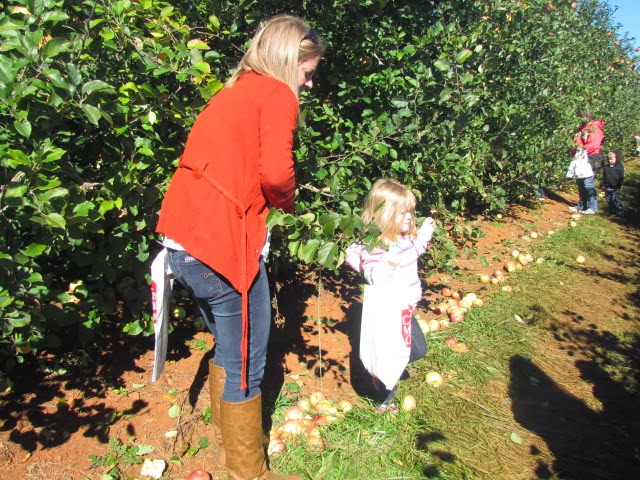 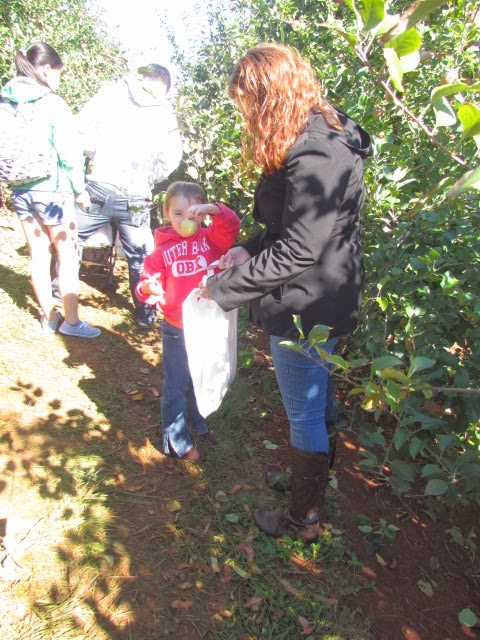 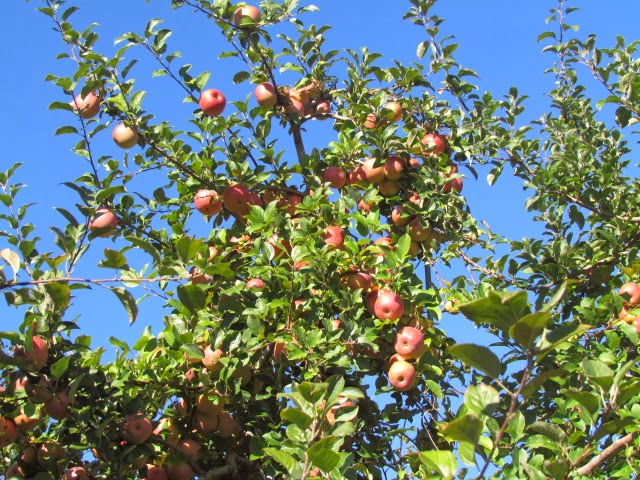 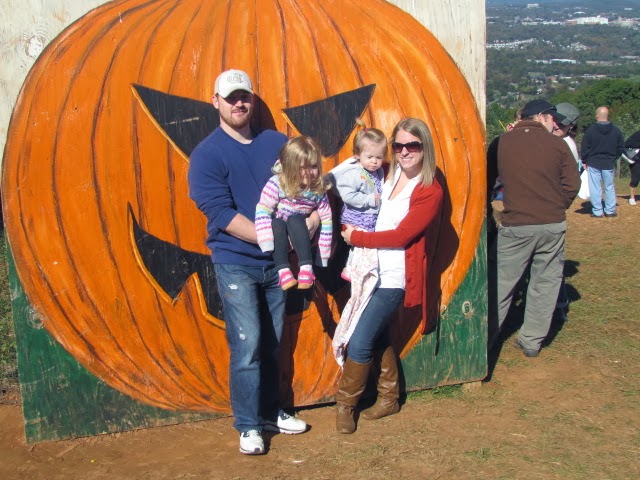 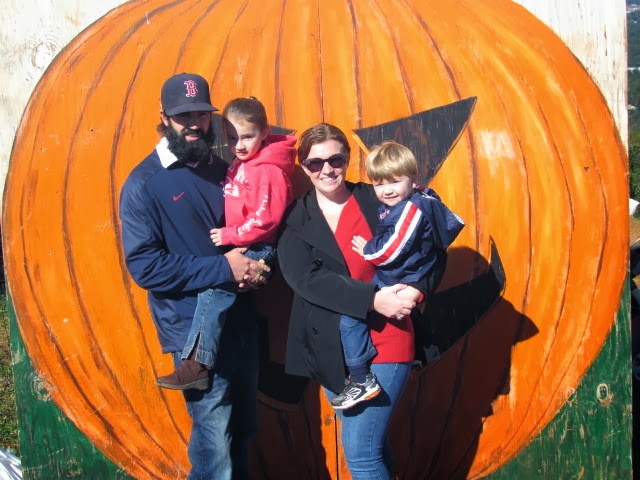 In comparison, I liked Carter Mountain because there was a ton of apple picking options and the views were a lot prettier than Graves.  BUT, I think I’ll want to head back to Graves next year.  Their festival has a lot more action and fun activities for the kids to enjoy other than just apple picking.  Either way, we had a great day spending time with family and some friends!